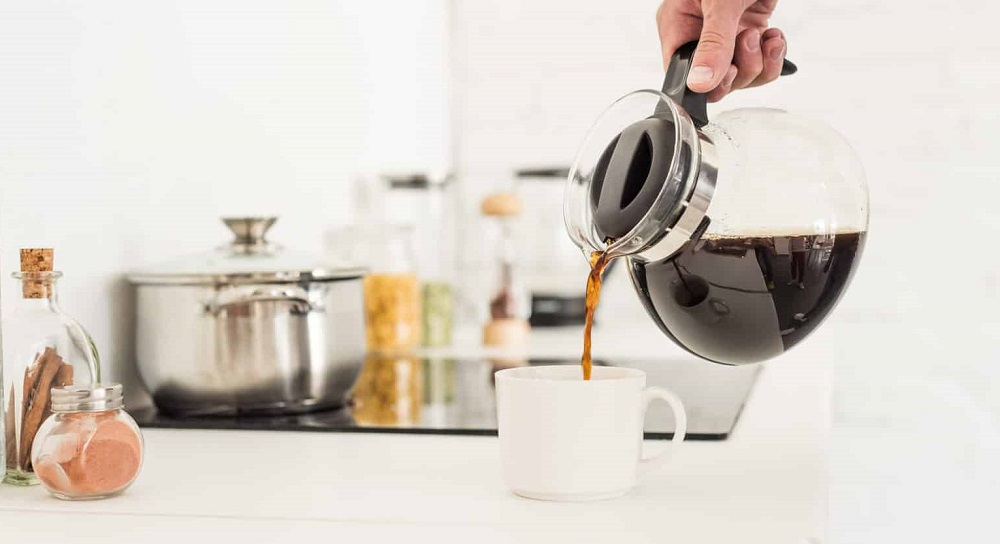 Not everyone needs or wants to make 12-cups of coffee every morning. Some people only need a couple of cups each morning. If you’re one of these people, then you have a couple of options available to you. You can purchase a single-serve machine, use your 12-cup machine to only make a couple of cups at a time, or the better option in our opinion, use a 4-cup coffee maker. These appliances are easy to use and only make the amount of coffee the consumer needs. Those are the reasons we’ve decided to review some of the best 4-cup coffee makers around, so all of our readers can find the model that suits them best.

Almost every coffee drinker is familiar with Mr. Coffee coffee machines. That’s because they’ve been making quality coffee brewing appliances since 1970 and that hasn’t changed. They’re still making quality appliances and this one is one of their best ones. It’s a 4-cup coffee make that’s designed to make just enough coffee for the consumer.

Although it’s a basic model, it has a small footprint, quick brewing and easy clean up make it a model that some consumers are going to want to seriously consider. It also should be mentioned that it’s warming plate is stain-resistant and easy to clean as well.

This model features an on/off switch and it has a grab-a-cup feature that will pause when the coffee drinker removes the carafe to pour themselves a cup. This model also features a dual water window that shows just how much water is in it, so consumers can avoid overfilling it. It also features a removable filter basket that’s easy to fill-up and use, and just as easy to empty for cleaning.

Although we didn’t like the fact that this product doesn’t have an automatic shutoff feature, which allows the coffee to “warm” all day long. This wouldn’t ordinarily be a problem, but the warming plate is kind of warmer than the average warming plate, so it can tend to cook the coffee if it sits too long without being shut off. Not a big deal, but definitely worth mentioning.

What we liked about it
– It has a small footprint.
– It’s easy to use.
– This is an inexpensive model.

It’s a 650-watt coffee maker that has a stain-resistant warming plate, an on/off indicator light for convenience, and a removable filter basket that’s easy to fill up and very easy to clean up after coffee has been brewed. It also has a footprint that’s nice and small.

This model also features a dual water window that allows the coffee drinker to keep an eye on the water levels as they fill their machine up for brewing. This prevents them from overfilling the machine and helps them to avoid spills. This model also features a grab-a-cup feature that pauses brewing so that the coffee drinker can pull a cup of Joe from the machine before it has finished brewing.

And speaking of pouring a cup of coffee, it needs to be said that sometimes it can be difficult to pour coffee using this model’s carafe. That’s because it does tend to dribble coffee. Otherwise, it’s a fine machine worth looking at.

What we liked about it
– This is an inexpensive coffee maker.
– It’s easy to clean up and use.

There’s a lot of things to like about this 4-cup coffee maker from Aigostar. It has a small footprint that allows it to fit on just about any counter easily, and it has a nice design that allows it to fit in with any decor. It also appears to be a well-made machine that’s constructed using quality components. This coffee maker comes with a glass carafe, a user’s manual, and a reusable coffee filter.

And all of this is priced very reasonably. All of those are good reasons for a consumer to consider this 4-cup model, but there are a couple of things worth mentioning about this unit. Let’s examine this coffee maker a little closer and see what stands out about it.

This 600-watt coffee maker has a warming plate that keeps coffee warm after it’s been brewed, water tanks with the water level marked so the consumer can read them, and a 30-second anti-drip system. It also features an on/off switch with a visible indicator light that tells the consumer that the unit is on.

All of these features are great, but this product does have one drawback worth mentioning. It’s cup sizes are a little smaller than we expected. Although it’s supposed to hold 20-ounces of water so it can deliver four 5-ounce cups of coffee, it feels like it delivers four 4.5-ounce cups of coffee. For most people, that’s not a deal-breaker, but it is worth mentioning.

What we liked about it
– It makes coffee quickly.
– It’s an easy-to-use machine. 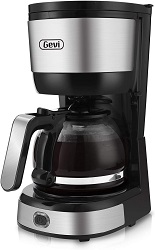 Although this 4-cup coffee maker is a little more expensive than any of the other models we’ve reviewed, we do think that it has a lot of great features. For example, this model has a space-saving design and sleek design that allows it to maximize counter space and to fit in with just about any decor.

It also has a simple on/off button that’s easy to use. And because this model has boil-protection, the consumer doesn’t have to worry about it heating their coffee until it’s thick mud or has completely boiled away. That’s because after two-hours the unit automatically turns itself off.

This model has a warming plate to keep coffee warm for those two hours that it’s one, has a brew basket that swings out so that it can be filled quickly and cleaned easily, and it has a permanent filter that can be placed into a dishwasher when it needs to be cleaned. This model is 10.1×5.4×6.8-inches, has a 30-second anti-drip valve that prevents messes, and a quality glass carafe.

All things considered, this is a good 4-cup coffee maker that many coffee lovers are going to appreciate having in their home. It’s also a coffee maker made from quality components, so it should last the consumer for quite some time.

A Guide To 4-Cup Coffee Makers

A lot of people brew a full 12-cups of coffee and then end up pouring the leftovers down the drain. This is not only a waste of money but is also a waste of good coffee. Therefore, we feel that most people are better served by buying themselves a 4-cup coffee maker. 4-cup coffee makers make less coffee so there’s less waster. They also brew coffee a lot faster than full-size machines, so coffee lovers can get a cup in them before they have to run out the door. To help consumers find the best 4-cup coffee makers for their needs, we decided to write this handy guide. This guide is designed to help just about anyone find the 4-cup coffee machine of their dreams.

A lot of consumers think that all 4-cup machines are the same and that’s just not true. Each model differs from every other model, so it’s up to the consumer to pay attention to the details. One area where this is especially true is the cup size. Not every coffee maker uses the same standard cup size. Some coffee makers use a 5-ounce cup size, which means their 4-cup machines hold a total of 20-ounces of water, and other coffee makers use a 3-ounce cup size. Therefore, the consumer should check the product’s details and descriptions to find out whether it holds 20-ounces or 15-ounces of water.

Look For An Anti-Drip Feature

An anti-drip feature can also be quite useful. This feature keeps the pot from dripping when the carafe is removed to pour a cup. This prevents it from dripping all over the warming plate and potentially staining it. Some manufacturers call this a Grab-A-Cup feature, which means the same thing. It just pauses brewing so the consumer can grab a cup of coffee.

The consumer might also want to think about if they want to use standard paper coffee filters or if they want a machine that uses a removable and reusable coffee filter. If it’s the latter, then there are plenty of machines that are equipped with a removable coffee filter. Why choose one of these models? There are several reasons for using a removable filter and that includes ease-of-use and less paper waste being produced by the household. Ultimately, however, it’s up to the preferences of the consumer and whether they feel this feature will be useful to them.

As a general rule, 4-cup coffee makers aren’t usually that expensive. There are budget models that are well under $20 (sometimes even cheaper with discounts), and most models are in the $20-$30 range. However, there are designer models that are even more expensive. It all depends on the coffee drinker’s budget and what they’re willing to spend on a 4-cup machine.

Other Features To Consider

Now that we have considered the basic features found on most 4-cup coffee machines, it’s time to turn our attention to some of the other features worth considering. Although there aren’t a whole lot of other features to think about other than the ones we’ve listed above, it’s worth going over them anyway. Having said that, let’s do a quick overview of them.

We think that it’s pretty easy to see that there’s no reason why anyone can’t enjoy one of these 4-cup coffee makers. They’re not that expensive, they’re easy to use, and more of them are jam-packed with features. All the consumer has to do is to think about which models they think are the best and then choose the one that suits their style. We hope that this guide has been helpful to our readers and helps them find the best 4-cup coffee maker for their needs.