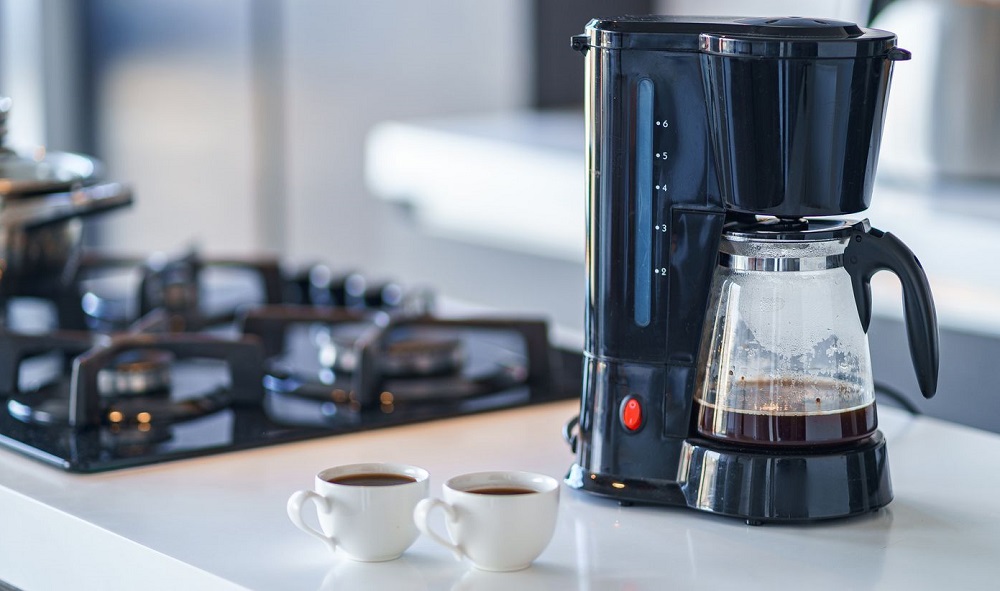 When the term small coffee maker is used, some people think about only 4-cup coffeemakers. Although we feel that those certainly fit in this category, we also think that several single-serve coffeemakers also fit in this category. That’s why we’ve looked through all of the available coffeemakers and selected models that we felt worked the best. With that in mind, we now would like to introduce our readers to the best small coffee makers. Machines that we feel will do the best job brewing just one cup or just a couple of cups at one time. Okay, let’s go ahead and take a closer look at these machines and discuss their major benefits and drawbacks.

When most people hear the brand name Black & Decker, they think of power tools and not necessarily coffee makers, but we’re here to change that perception. We think that this machine is the epitome of simplicity and is, therefore, the best small coffee maker that can currently be bought. It’s a machine that has a space-saving design that can fit just about anywhere, it can brew up to 5 5-ounce cups of coffee and it has an attractive design as well. With that being said, let’s take a look at some of its features and see what puts it at the top of our list.

Let’s start with its design. This model is 7.2×8.2×10.8-inches in size and features one-touch control that consists of one lighted on/off switch. As can be seen from its dimensions, its small size allows it to be easily used in dorm rooms, efficiency apartments or RVs quite easily. It’s also designed with a carafe that’s easy to hold onto and pour and allows the coffee drinker to pour a cup of coffee without it dripping.

Another feature found on this model is a sneak-a-cup feature. This feature allows the coffee drinker to pour themselves a cup while the machine is brewing and do it without worrying about making a mess. We also appreciated that this model didn’t use paper filters, but instead used a permanent grounds filter that can be easily cleaned out between uses. And it also has a water reservoir that has clear markings so the consumer is less likely to overfill the machine while they’re setting it up.

Keeping all of these features in mind, it’s easy to see how this is a great small coffee maker for personal use. It’s a machine that seems well-built and runs flawlessly without any major issue. It’s also a machine that’s reasonably priced, so consumers can enjoy making small pots of coffee without having to pay a premium for it.

What we liked about it
– It doesn’t require paper filters.
– Fits in small spaces.
– It’s easy-to-use and easy-to-clean.

Sboly wasn’t a company we were familiar with at first, but after coming across a few of their products, we have to say that we’re impressed. They seem to be a company that’s manufacturing interesting and innovative products. And in the category of small coffee makers, they’ve created this remarkable machine. A machine that’s capable of using either coffee pods or ground coffee to brew up a cup of coffee in only 180-seconds. Let’s examine this machine closer and see what it gets right.

We’d like to start this review with its design. It’s a machine that’s designed to be both durable and compact at the same time. It’s approximately 12-inches high, 7.5-inches deep and 4-inches wide. This means that it’s not the smallest small coffee machine we’ve reviewed, but it is compact enough to make it easy to use in small areas such as dorms, efficiency apartments, and RVs. It’s also a machine that allows the consumer to select between pods and grounds with the simple push of a button.

Speaking of pushing buttons to get things done, this machine also has an automatic-cleaning button. That means that when the consumer presses two buttons, the machine can clean itself. That makes an easy-to-use machine even easier to use. And because of its water reservoir design, it’s one of the simplest machines to setup as well.

We also would like to applaud the way this machine makes coffee. It seems to brew it at exactly the right temperature, so the coffee comes out perfectly. Although this machine does cost more than any of the other small coffee makers that we’ve reviewed, we do think that it’s a machine worth using. It’s a coffee maker that has all of the features that coffee drinkers need in small spaces. That’s why we have no problem giving it our full recommendation.

What we liked about it
– It can be used with pods or coffee grounds.
– It has a compact design.
– It’s easy-to-use and easy-to-clean.

Before we begin this review, it’s probably worth stating that this is a bare-bones coffee maker. What we mean by that statement is that it doesn’t have the features that so many coffee makers have nowadays. Its main features are that it has a small design, that it’s easy to operate, and that it brews four cups of coffee. Any of our readers who are searching for a machine that has more bells and whistles are probably going to want to look at another machine.

Having stated that it’s a bare-bones model, we do think that it’s still one of the best small coffee makers available. It’s only 9×7.25×10.9-inches in size, so it easily fits on just about any counter. That makes it a good machine for use in RVs, dorm rooms, small apartments or small break rooms. It also has an on/off switch that’s illuminated, so it’s not only easy to turn on and off, but it lets the user know when it’s in operation. This is handy considering that it doesn’t have an automatic shutoff feature.

It’s also worth noting that this machine has dual water windows that make it easy for consumers to fill up the machine. It also features a stain-resistant warming plate and a removable filter basket that’s easy to fill and easy to clean. Another thing we’d like to mention is that it has a grab-a-cup feature that will pause the current brewing cycle if the consumer decides to grab a cup. That prevents unintentional spills while the machine is brewing.

And finally, we’d also like to state that this machine is also pretty inexpensive. It’s half the price of small of the fancier single-serve coffee machines and even makes it less expensive than some other small coffee machines. That alone makes this coffee maker a model that consumers might want to think about. And by the way, it does brew a great small pot of coffee.

What we liked about it
– It has dual water windows.
– It brews 4-cups of coffee.

A Guide To Buying A Small Coffee Maker

Once a person decides that a full-size coffee maker is too big for their needs, they’re going to want to turn their attention to buying the best small coffee maker possible. And that’s easier said than done. That’s because many people consider these machines to be just smaller versions of full-size models, there are some differences between the two. It’s these differences that the consumer has to think about to buy the best one possible. It’s the reason why we’ve created this guide as well. Let’s take a few moments to talk about what to look for when purchasing a small coffee machine so that you can avoid the duds and buy the models that more aptly fit your needs.

OK, so you have determined that you don’t need a 12-cup coffee maker, but that still leaves you with plenty of options. There are coffee makers that can serve single cups of coffee and models that can serve anywhere from 4-6 cups of coffee. So you’d think it would be easy to just figure out how much coffee you plan to drink and then buy a model that reflects that reality. However, that isn’t always easy. That’s because different manufacturers calculate cup size differently. For some manufacturers, a cup of 5-ounces and for others its 6-ounces. A 4-cup coffee maker that operates on a 5-ounce model can brew 20-ounces of coffee, while another 4-cup coffee maker that operates on a 6-cup model can brew 24-ounces of coffee. Therefore, you need to figure out what cup size the coffee maker’s manufacturer considers as their baseline.

It’s also important for the consumer to think about the size of the machine. And we’re not talking about how many cups of coffee it can brew, but the physical space it occupies. Some machines have a small footprint, while others have a larger footprint. If counter space isn’t at a premium, then this doesn’t matter as much, but if the consumer does have limited counter space, then they’re going to want to pay particular attention to the coffee maker’s physical size.

It’s also a good idea if you think about the brewing options that are needed. Some people only want to brew using coffee grounds, which is fine, but in those cases, they don’t need to think too much about brewing options. However, if you want to have the flexibility to brew with coffee grounds one day and K-pods another day, then you’re going to want to make sure that you find a machine that’s capable of offering that flexibility. There are plenty of 2-in-1 or 3-in-1 small coffee makers that offer this versatility, so you shouldn’t have any problems finding one.

Other Features To Consider

Now, let’s take a few moments to talk about some of the other features that consumers might want to think about before purchasing their next small coffee maker. Although we consider the above features to be the most important ones to consider, we can’t dismiss the following features altogether because they do make coffee makers easier to use and maintain. Let’s take a look at a few of these features.

Once you’ve secured a small coffee machine that suits your needs, you are going to want to keep that machine running as well as possible for as long as possible. Even though these machines are usually quite affordable, they’re less affordable if the consumer has to keep buying new ones regularly due to negligence. Therefore, we’ve created this section of the guide to help all of our readers take reasonable care of their small coffee maker.

Rinse Out The Carafe Daily

The first step to keeping the coffee maker clean is to rinse out the carafe daily. This will help prevent the coffee from staining the carafe.

Leave The Lid Up After Brewing

It’s also a good idea to empty out the machine’s filter basket and leave the lid up after brewing has finished and the machine is off. This will allow air to circulate, help moisture to evaporate and prevent the growth of fungi and other microorganisms in the machine’s water reservoir.

Deep Clean Once A Month