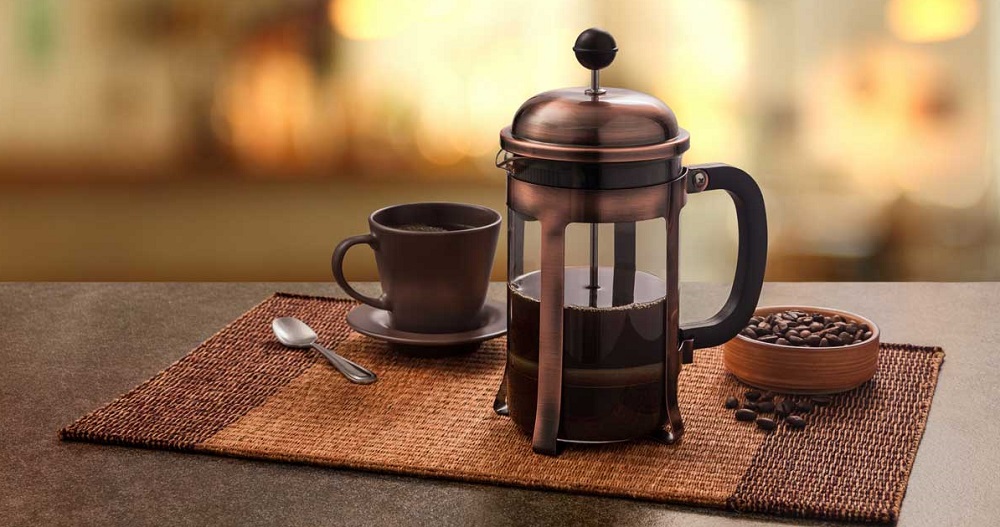 Using a French press is one of the best ways to make coffee. Because this method allows the coffee drinker to control all the variables of the brewing process, the coffee made using this method is usually well-balanced and tasty. Of course, that depends on whether the consumer has purchased the best coffee for French press brewing or if they’ve purchased a lesser quality coffee. How can a person find the best coffee for this brewing method? A sure-fire way is for them to read this guide. That’s because we’re not only going to review some of the coffees we think are great, but we’re also going to give some information on how to make great coffee using a French press.

Quick Summary of the Best Coffees For French Press

Even though this coffee is technically a coffee designed for iced coffee blends, we’ve found that it brews up nicely in a French press. In fact, we loved it so much that we had no qualms whatsoever recommending this coffee as the best coffee for French press brewing currently available. Not only is this coffee reasonably priced, but it also has a flavor that we think will delight most coffee drinkers. It has a flavor that has hints of caramel, grape and chocolate undertones to it that makes it great for drinking. And because this coffee is low-acid, it’s easier on the stomach as well.

What we liked about it
– Has a great body to it.
– Brews up beautifully in a French Press.

This is a whole bean coffee that consumers are going to have to grind themselves before they brew it in a French press. Once ground, however, this coffee produces a flavor and aroma that’s coffee drinkers won’t soon forget. It has notes of brown sugar, dark chocolate and roasted hazelnuts that make it not only good for French press brewing but also makes it good for a cold brew and drip-machine coffees.

These beans are sourced from Central and South America and are not only rated organic but are also rated as Fair Trade and Kosher. And it’s roasted and bagged in the United States, right at the base of the Rocky Mountains so consumers can rest assured it’s a quality product.

What we liked about it
– It’s a reasonably priced whole bean coffee.
– It’s organic, Fair Trade and Kosher certified.

This dark roast ground coffee claims to be the world’s strongest coffee, but it’s most certainly not the strongest coffee we’ve had, so maybe they’re talking about its caffeine level. All that we know is that this is one of the smoothest and most aromatic coffees that we’ve ever had the pleasure of drinking.

This is no surprise considering that it’s made using USDA certified Fairtrade Organic coffee beans, but it’s important enough to mention in this review. This is a coffee that a lot of people are going to want to make in their French press, even though it costs a little more than comparable brands.

What we liked about it
– This is a smooth dark roast coffee.
– This coffee has a great aroma.

This coffee has a distinct flavor that’s very enjoyable, although it wasn’t as bold as we would’ve liked it to have been. It’s a dark roasted whole bean coffee that has undertones of vanilla, a sweet underlying smokiness to it. It’s sourced from 100% USDA organic Arabica coffee beans that have been shade-grown and are non-GMO certified.

These beans come from small farms in Latina America and have an aroma that’s not overly strong but is pleasant nonetheless. Taking all of this into consideration, it’s easy to see why this very affordable coffee will be appreciated by most coffee fans.

What we liked about it
– It’s an inexpensive coffee.
– It has a nice taste and aroma to it.

Starbucks is a company that’s synonymous with coffee, so it shouldn’t be a surprise that they’re selling a dark roast coffee that has a cocoa texture and a well-balanced, if not a bit acidic, flavor. What is surprising, however, is that this coffee is reasonably priced, so consumers can easily brew up their favorite French press coffee and do it without breaking their budget.

And because it’s a whole bean product, consumers can grind it up only when they need it. This creates a fresher, better-tasting coffee than what’s usually available when using store-bought coffee grounds.

What we liked about it
– This coffee is reasonably priced.
– It has a nice aroma to it.

We think that the biggest complaint we had about these coffee beans was that they claimed to be bold, but weren’t all that bold when brewed. However, with that being put out there, we have to say that this is a decent coffee–if the consumer is looking for something a little bit milder than the usual French press coffee.

It’s a product sourced from Colombian, Guatemalan, and Sumatran Arabica coffee beans, and they have a nice smooth flavor that isn’t bitter. It’s also a coffee that’s not too expensive and one that’s ready to be ground whenever the consumer needs a cup of coffee.

What we liked about it
– These beans have a nice aroma & flavor.

Even though this isn’t the least expensive coarsely ground coffee we’ve ever tried, we have to say that it’s one of the best-tasting coffees we’ve had in a while. This coffee is sourced from premium Arabica beans that are shade-grown, harvested by hand, and naturally dried to preserve their delicate flavor.

These Nicaraguan beans are medium-roasted and coarsely ground, so they make a mild French press coffee that has citrus notes, a low acidity level, and a medium body. They’re not as bold as we like our French press coffees to be, but it is a nice coffee for sipping.

What we liked about it
– It’s a low-acid & very smooth coffee.

These medium-dark roasted coffee beans aren’t the boldest coffee we’ve reviewed, but they are inexpensive and they have a nice mild taste to them that we’re sure some coffee drinkers are going to love. This product is made with 100% Arabica beans that are sourced from Central and South America and have notes of toffee, chocolate and mandarin underlying their flavor. They also have a sweet aroma that’s going to knock the socks off of a lot of coffee fans.

All things considered, we think this is an excellent coffee that we would’ve rated higher if it was just a little bit bolder. As our readers can probably ascertain from our reviews, we like a bolder bean for our French press coffee. However, that preference doesn’t mean that this coffee is any less impressive. It’s just for people who prefer a milder flavor.

What we liked about it
– These beans have an awesome aroma.
– This is an affordable coffee.

A Guide To French Press Coffees

Having just given our readers a list of some of the best coffees for French press brewing, we thought that we might go ahead and explore the subject in a little bit more detail. Not only because people want to know what kinds of coffee they can use in a French press (or more aptly put, should use in a French press), but they also want to know how that coffee should be brewed. That’s why we’ve decided to put together this little impromptu guide. In its sections, consumers should be able to discover everything they ever wanted to know about making French press coffee.

What Type Of Coffee Is Best For French Press Brewing?

We’re going to start this guide by talking about what types of coffees are best for use in a French press. Although it’s technically possible that any ground coffee can be used in a French press, some types of coffee are more suitable for this particular brewing process and therefore make a better coffee. Let’s take a look at some of the characteristics that consumers should consider when buying the best coffee for the French press.

The first thing the consumer should consider is whether the beans are whole or ground. In our experience, it’s better to buy whole beans and grind them yourself, then it is to buy beans that have been ground at some indeterminate time in the past. Freshly ground beans taste better than ground beans that are more likely to be stale. However, since we understand that not everyone can or wants to grind their own beans, this step isn’t absolutely necessary.

Think About The Coffee’s Grind

If you decide not to go with a whole bean coffee, then what you should consider is the coarseness level of the ground beans. In our experience, coarsely ground beans are the best for French press brewing. That’s because fine grounds tend to over-extract during the process. However, if you don’t want to go with a coarse ground coffee, then a medium ground coffee usually works almost as well.

Thing About The Coffee’s Roast

Coffee fans are also going to want to think about the roast level of the coffee they use in their French press. For the most part, consumers are going to want to use a dark roast or at least a medium roast coffee in their French presses. Although you could technically use light roasted coffees, they just don’t turn out as well using this method of brewing. That’s why we highly recommend dark roast coffees whenever possible.

Once you’ve selected the best coffee for your needs, it’s time to turn your attention to the actual brewing process. Since there are about a dozen ways of using a French press to make coffee, we’ve decided to not decide on one but instead offer you some tips on making better French press coffee. That way, the following tips can be used by anyone, no matter how they make their French press coffee.

Grind Your Beans Before Brewing

Another trick to making great French press coffee is to use purified water. Tap water is often full of chemicals and impurities that can ruin the taste profile of carefully selected coffee grounds. Anyone who doesn’t believe us merely has to try it out one time to see if it makes a difference. However, we know that once you do try using purified water for making coffee, you’ll never go back to tap water again.

Boil The Water To A Precise Temperature

The last tip we want to give our readers is to tell them to boil their water to a precise temperature. And that temperature is 205-degrees Fahrenheit (96.11-degrees Celsius). This temperature can be easily achieved by bringing water to a boil, turning off the stove’s burner, and then allowing it to sit for 30-seconds. When the 30-second mark has been achieved, the water will be a perfect 205-degrees Fahrenheit and ready to be used in your French press.