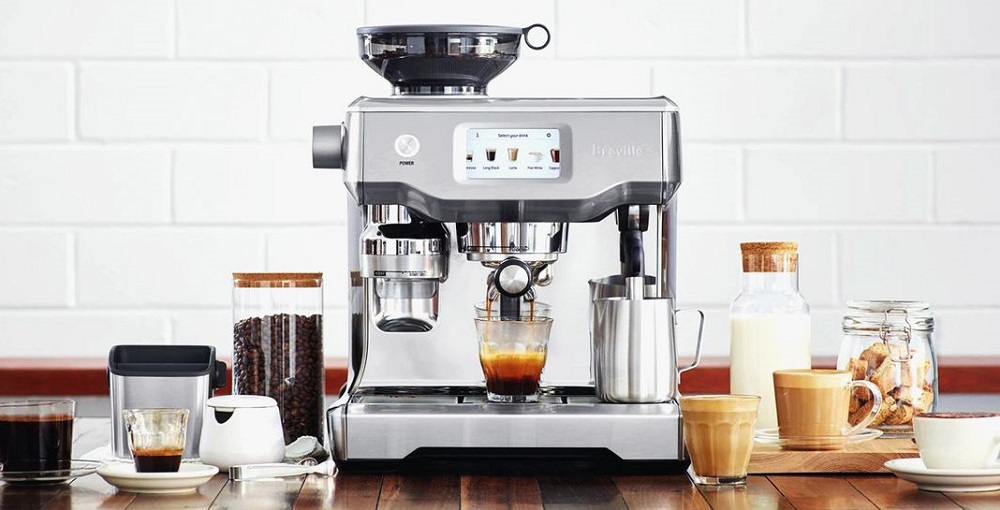 Quite a few people mix up lattes and espressos—which is quite understandable because these two coffee drinks have a lot in common. However, lattes have one key difference and that’s the addition of more steamed milk than espressos have. This extra steamed milk makes all of the difference and creates a drink that’s richer and creamier than any other coffee drink available.

Of course, making a proper latte not only requires a little bit of skill, but it also requires a machine that’s up to the task at hand. And finding a machine that makes a good latte isn’t always that easy. Fortunately, we were able to find the best latte machines for our readers, so everyone has the right tool available to them. A tool that will craft a creamy coffee drink that will make the operator the envy of all their friends and family members.

Anyone who has ever made a latte knows that this particular coffee drink needs a steam wand that’s capable of delivering true micro-foam milk. Milk that’s full of thousands of tiny bubbles that can be used to turn an ordinary espresso into a true work of art. A steam wand that allows the coffee machine operator to not only enhance the flavor of their coffee but also create some fanciful works of latte art that can’t be replicated on other machines.

Of course, making the perfect latte requires more than just adding some fancy whipped milk on top of it. It also requires a base that’s perfectly made, and this machine is capable of helping out in that category as well. It does it by grinding the coffee beans to perfection—all thanks to its built-in coffee bean grinder. A grinder that can dose out the perfect single or double shot into the machine’s portafilter. It even has a grind dial that allows the user to choose the grind that works best for their cup of latte.

What really makes this 1,600-watt machine exceptional, however, is its precise extraction. It’s digital temperature control and its 15-bars of pressure allow this machine to extract the essence out of the coffee grounds to make an incredibly rich and opulent base upon which the consumer can build the perfect latte. There’s just no other machine that provides the power, precision, and features that the home latte needs to pull a great single or double shot.

This machine also comes with several included accessories that include a razor-dose trimming tool, single and dual-wall filter baskets, a 54mm stainless steel port filter, an integrated tamper, a coffee scoop, a stainless steel milk jug, a water filter, and water filter holder, a cleaning brush, Allen key, and cleaning discs. That’s just about everything the consumer needs, aside from coffee grounds and water, that they need to brew the perfect cup of latte.

What we liked about it
– It has a built-in coffee grinder.
– Its steam wand delivers latte-art precision.
– It can make single or double shots.

To anyone who isn’t experienced making cappuccinos, lattes, and espressos, the process can be quite daunting. Figuring out just how much coffee to use, how to set up the machine and learning how to properly use the steam wand can be a real pain and takes a lot of practice. Fortunately, this machine takes a lot of work out of the process and that makes it a good entry-level machine for anyone searching for a simple machine that will crank out a good latte.

This machine has simple controls that allow the consumer to pop in a K-cup pod and set it to make the best latte around. It also features a 60-ounce water reservoir that makes brewing up to 6-cups of coffee at a time simple and easy. And because this reservoir can be removed, it’s extremely easy to refill after those cups of latte have been brewed. Other features found on this model include a smart-start feature that brews the latte in one easy step.

Another thing we’d like to mention is that this machine is also capable of accommodating a travel mug that’s up to 7.2-inches tall. That allows the busy consumer to brew up a cup of latte for taking on the road with them. This model is also energy-efficient and will shut down 2-hours after the last cup of latte is brewed. And because it comes with a stainless steel milk frother that’s easy to clean and can be tossed into the dishwasher, making a milky froth has never been easier. The only real drawback to using this system is that it doesn’t allow as much customization of the coffee that other machines do, and it does require the consumer to use K-cups instead of actual coffee grounds.

What we liked about it
– It’s easy to use by just about anyone.
– It’s energy-efficient.
– It’s reasonably priced.

Even though this machine might not have the same features that commercial latte machines have, it does provide more versatility than an ordinary coffee maker. This semi-automatic machine is capable of making coffee, cappuccinos, and latte in no time flat. It comes with a 15-bar pump that brews some incredibly tasting espresso coffee and it comes with an automatic milk frother that’s easy to use and doesn’t require the consumer to be a skilled barista. Sure, it’s not going to provide the same level of control that fancier machines do, but this machine is only a fraction of these commercial machines anyway.

Another thing that we liked about this machine was the ease of use with which it could be used. It has removable milk and water reservoirs, so the consumer should have no problem setting it up. It also has a 26-inch cord-length that’s long enough for the consumer to place the machine anywhere on their counter. And because this machine has buttons for makes lattes, cappuccinos and espressos, it’s easy enough to be used by just about anyone. And when we say anyone, we mean even consumers who have never worked in a coffee shop a day in their life.

This machine also comes with some accessories that make it easy to use. It comes with a filter that’s suitable for single and double espressos, and it comes with a tamper/scoop. Now there’s no reason for the average person to make the espressos, lattes, and cappuccinos at home. With this latte machine, no one has to head on out to their local coffee shop to pay a fortune for a cup of coffee that they can enjoy in the privacy of their home for a fraction of the cost. This is a machine that anyone can use to create a great latte, espresso or cappuccino for themselves and/or their friends and family.

What we liked about it
– This model is inexpensive.
– It can make basic lattes.

There are two ways for the average consumer to enjoy a beautiful latte. They can either go to their local coffee shop and pay an exorbitant amount of money every day for a latte, or they can make one for pennies on the dollar at home. Perhaps we’re a bit cheap, but we certainly think that the latter method is the best way to enjoy a latte.

However, before the consumer can enjoy making lattes in the privacy of their own home, they first have to find the machine that will allow them to do it. And that’s not always as straightforward as most people would like. After all, there are so many different features to consider that it can be confusing to someone who isn’t already a barista. That’s why we’ve decided to write this guide. In this guide, the consumer will find an easy-to-follow outline for choosing the best latte machine for their needs.

Step One: Choose Between A Super-Automatic Or Semi-Automatic Machine

The first important step towards the best latte machine is to decide between a super-automatic or semi-automatic machine. Most latte machines nowadays fall into one of those two groups, so it’s up to the consumer to decide which one is right for them. Super-automatic machines make great lattes, but they do take some of the control away from the consumer, and they tend to cost a bit more. This makes this a great machine for consumers who don’t want to learn the art of making lattes. For people who have a few barista skills, however, they might want to consider a semi-automatic machine. These machines give the home barista a certain amount of control over the latte making process and they tend to be affordable as well.

The capacity of the latte machine is also something that the consumer is going to want to think about. Most of the machines manufactured today can make around 6-cups of coffee, but some machines can hold more water, and therefore can brew more coffee. If the consumer needs a machine that can brew more than that, however, they’re probably going to have to go with a commercial model that can be attached to the home’s water supply. Most people though will find that the average 6 or 8-cup model is more than enough for their needs and they won’t need to spend the extra money on a commercial unit that can cost in excess of a thousand dollars.

Step Three: Consider Whether A Grinder Is Necessary

The consumer should also think about whether they need a machine with a built-in coffee grinder or if they can manage using a separate coffee bean grinder. The automatic machines already come with built-in grinders, but some of the semi-automatic ones do as well. If the consumer determines they need a model that has a built-in grinder, they’re then going to want to consider what capacity grinder they’re going to need. The larger the grinder equipped on the machine, however, the more expensive the machine is likely to be.

Another feature that people fail to consider when purchasing a latte machine is the temperature controls on the machine. This is unfortunate because the espresso used to make a latte has to be brewed at the right temperature for proper extraction. Consumers should look for digital temperature controls that are either controlled automatically or with the consumer’s input.

Temperature is only half the equation when it comes to extracting the proper crema from the coffee grounds. The machine also needs to supply the right amount of pressure—otherwise, the consumer isn’t brewing espresso for their latte but is merely brewing a cup of coffee. The machine’s pump supplies anywhere from 15 to 19-bars of pressure in order for the essences of the coffee grounds to be properly extracted. If the machine can’t supply that amount of pressure, then it won’t work as a latte machine.