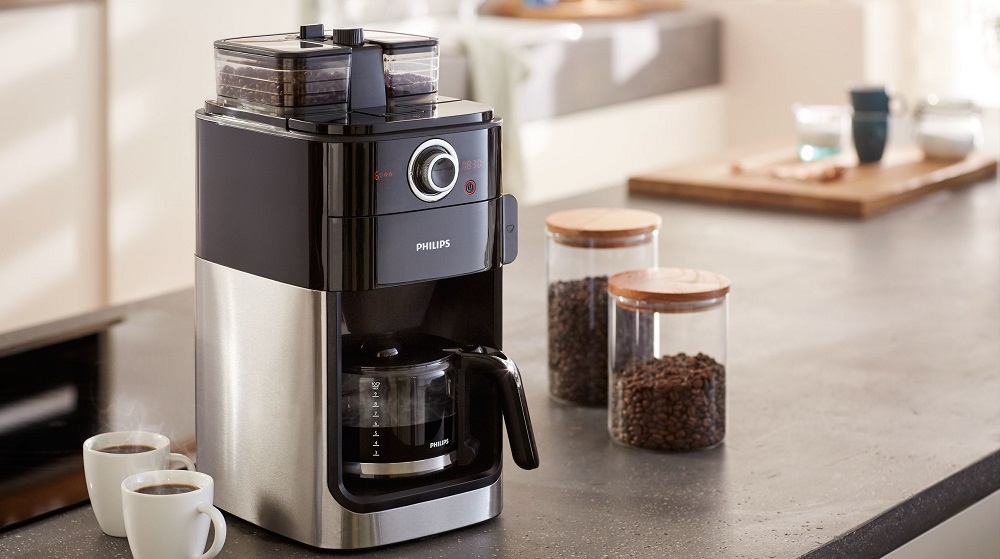 Grind and brew coffee makers combine two great tools into one great machine. These machines allow the consumer to go straight from coffee bean to cup of coffee without a whole lot of fuss and without having to use both a separate coffee grinder and coffee brewer. Of course, how well these machines work for the consumer depends on not only how well they’re built but also the features they contain, so we’ve decided to review some of the best grind and brew coffee makers currently available. The following products are the ones that we feel do the best job of fulfilling the promises of convenience and speed that’s so often promised by the manufacturers of these machines.

Quick Summary of the Best Grind And Brew Coffee Makers

Black & Decker is a company that’s well known for its tools but is also becoming increasingly known for its line of coffee makers. And one of the coffee makers produced by this company is this one we’re about to review. It’s the Black & Decker Mill & Brew Coffee Machine. It’s a coffee maker that’s designed to make brewing fresh coffee quick and easy, and in our opinion, it’s a machine that accomplishes that goal extremely well, as we’ll explain below.

First of all, we’d like to say that we thought that this coffee maker had a nice design to it. It was a streamlined machine that looks like they put a considerable amount of thought into their design. Although it’s not a small machine, coming in at about 10x13x16-inches in size, it’s not so big that it takes up a lot of space. It’s also a grind and brew coffee maker that comes with quite a few interesting features, so let’s examine those next.

This machine has an auto-brew feature that allows the consumer to set the start time of the coffee up to 24-hours in advance, and it has an automatic shutoff feature that will turn the machine off once it has finished its cycle. It also has a sneak-a-cup feature that will pause brewing if the consumer removes the carafe to pour themselves a cup of coffee. This prevents those unfortunate messes or drips that can occur with some other brands of coffee makers.

This model’s built-in grinder also works exceptionally well and grinds the coffee beans nice and evenly. The only real complaint we had about this machine was that the reusable ground basket was a bit hard to clean. Most of the time we would have to pull it out and rinse it under a running faucet, which left coffee grounds all over the sink. Other than that unfortunate feature, however, we feel that this is a great coffee maker and worth buying.

What we liked about it
– It has a 12-cup capacity.
– It’s reasonably priced.
– It can use both grounds or coffee beans.
– This model is inexpensive.

This nice-looking and stylish machine from Cuisinart has many of the features we look for in a grind and brew coffee maker. It has a nice slim design that allows it to be used easily on most counters, it has an automatic conical burr grinder that gives the user excellent ground consistency, and it has a half-pound bean hopper that holds the coffee beans and keeps them fresh until the moment they’re ground through the machine.

Another thing that we liked about this model was that it had ground control and could be easily programmed for four to twelve cups of coffee. It’s also equipped with a gold-tone commercial-style reusable filter that’s fairly easy to remove and clean. And because this model is also equipped with a charcoal water filter, it not only brews fresher coffee than most coffee makers, but it also makes better-tasting coffee than most other coffee maker models.

Other features that can be found on this exceptional grind and brew coffee maker include an automatic shutoff feature, an auto-rinse feature, flavor strength options (regular, bold, and extra-bold), and an extra-large LCD-display. And if the consumer doesn’t want to grind fresh coffee beans for their coffee for some reason, this machine also has a grinder off feature that allows the consumer to use regular coffee grounds.

The one flaw worth mentioning about this unit is that it’s quite noisy as it runs. It seems to make a pretty good racket, so that’s something consumers should think about. Having said that, however, we do feel that this is one of the better machines currently available. And it’s one that we feel most consumers are going to want to take a closer look at.

What we liked about it
– Makes 12-cups of coffee.
– Makes excellent coffee.
– It is equipped with a burr-grinder.

This Gevi grind and brew coffee maker might be easy on the eyes, but it’s not just another pretty appliance. It’s a coffee maker that has the features that consumers need to brew a great cup of coffee. Although it’s only capable of brewing 10-cups of coffee at a time, it does do a good job of making sure that the coffee is fresh and hot when it’s brewed. We took a close look at this model and the following review reflects what we feel are this machine’s finer points.

The first thing we’d like to acknowledge is that this product has a built-in burr grinder. This already makes it better than other grind and brew coffee makers that use a bladed coffee grinder to grind coffee beans. Because it uses a conical burr grinder, it grinds the beans more evenly and this allows for better coffee extraction. And it’s also worth mentioning that this particular grinder also doesn’t clog up the way some inferior grinders tend to do.

Another feature that we liked was that this machine was equipped with a programmable timer function. It can be set up to brew the coffee automatically in advance, and the coffee maker will keep warm for up to 2-hours at a time. It’s also worth mentioning that this unit had a 30-second pause-function that allows the consumer to steal a cup of coffee without making too big of a mess. And its no-drip design means that it won’t drip at all when the carafe is removed from the unit.

And the above features that we’ve mentioned aren’t the only ones worth mentioning about this unit. It has several other features that make the unit easy to use and easy to clean. For example, this unit is equipped with 8 different grind settings, intuitive controls, an LCD screen, a water tank with visible level markings, and a control that allows the consumer to select from mild coffee, medium coffee or strong coffee.

What we liked about it
– It’s equipped with a conical burr grinder.
– It has a programmable timer feature.
– It has a brew-pause feature.

We’ve done our best to introduce our readers to the best grind and brew coffee makers currently available, but we do realize that some people may want to look for something a little bit different than what we’ve recommended. That’s okay, after all, we all have different tastes. That’s why we’ve decided to go ahead and whip up this guide on the subject. Hopefully, this guide will give all of our readers the tools they need to find the best machines for their needs. Now, let’s get started.

The Type Of Integrated Grinder Is Important

Consider One With A Programmable Timer

Another thing the consumer should think about is finding a machine with a programmable timer. This makes the machine a lot easier to use and prevents the consumer from having to set up the machine while they’re still half-asleep. For models that have a programmable timer, it’s easy for the consumer to set up the machine the night before and then have it automatically grind the coffee beans and brew the coffee while they’re still asleep. They can then wake up to a hot, fresh cup of coffee before they have to head to work.

Consider One With An Automatic Shutoff

It’s also worth considering a machine that has an automatic shut-off feature. This will shut the coffee maker off after a predetermined amount of time. This makes it easier for consumers to grab a cup of coffee and run out the door without having to worry about whether they shut the machine off or not before they go.

The consumer is also going to want to make sure that whatever model they have has controls that make it easier to use. Although every machine is different, there are some basic features that consumers should look for when searching for a new grind and brew coffee maker. For example, a large LCD can make setting the machine up quick and easy. Also, the ability to choose grind size or brew strength is also an important consideration.

Another feature that’s great and makes any machine easier to use is a grab-a-cup feature. This feature pauses the brewing process so the coffee drinker can grab a cup of Joe without having to worry about the machine dripping and making a mess. It’s a simple feature but one worth having on not just grind and brew machines but any coffee maker.

One feature that we’re fond of but isn’t found on a lot of these machines is a built-in water filter. Some models are equipped with a charcoal filter that automatically filters the water as the consumer uses it. That makes for better-tasting coffee because all of the impurities are filtered out of the water. And anyone who has ever used filtered water to make their coffee knows this can have a huge impact on the taste of the coffee.

The size of the machine is another thing worth thinking about. Especially if the machine is going to be used in a small space such as an efficiency apartment or RV. Some of these machines can be quite large, so the consumer should always make sure it will fit in with the counter space they have available.

Price is another important consideration. There are very inexpensive grind and brew coffee machines, and some very expensive ones as well. The consumer should make sure that the machine they choose fits in their budget but still has the features they need.

Additional Features To Think About

Okay, we know that this has been somewhat of a long guide, but we’re almost on the back end, so please bear with us. Before we officially ended this guide, we wanted to go over some of the other features that the consumer might want to consider. Features that either make for better-tasting coffee, make the machine easier to use and/or makes the machine easier to clean. With that said, below are some of the features to think about before purchasing a new coffee maker.